Are you working on auto body repair? And are you looking for the one tool to get rid of rust?
This tool brings the power of professional and highly effective auto body repair tools to your garage! 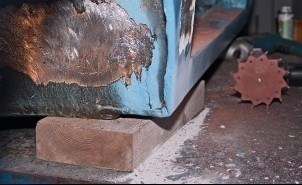 The Tercoo® Rotating Blaster contains one or more rubber disks with hard metal pins. During operation the force created by the rotational speed of the disks, cause a ‘hammer effect’ that effectively removes rust (and other unwanted layers if you’d like!).

When you’ve been doing auto bodywork for a while, you know that rust is a common ‘problem’. Rust usually occurs in car bumpers, doors, beams and welds. Especially the downside of a car is often heavily rusted. You might also know that to get rid of this rust, you need the right tools. Tercoo® provides you with this.

What else can you use the Tercoo® Rotating Blaster in bodywork for?

The Tercoo® Rotating Blaster cannot only be used to remove rust from cars or for other car detailing work. It can also remove paint, tectyl, tar and several coatings. It’s a multifunctional tool that can be of great use in your body repair shop.

On this page you’ll find some pictures of the Tercoo® Rotating Blaster in use during body repair work and the results.

Want to know more about the Tercoo® Rotating Blaster? Take a look at our information page.

Considering buying this tool? Please take a look at our where to buy page.